Chat with us, powered by LiveChat
Click here to unmute video

Latin dancing is one of the most beautiful and energetic shows you can find. There are many varieties of this style, but all of them have two essential things in common, sensuality and passion. Latin dancers can light up any party within a few short minutes and get your guests into a great mood.

At Hips Don’t Lie Dance Co. we offer a wide range of Latin dancing shows that can fit different types of events. With beautiful professional costumes, energizing Latin-American music, and masterfully choreographed performances, our dancers will make your party unforgettable.

"It's a very professional group. I saw their performance at one of my friends Christmas party and I liked it so much that I decided to recall them at our Annual Remax Christmas party 2016.Although their schedule was very tight but they could able to perform in our party. Thanks to Lena and Anthony. I will recommend each and every friend of mine. Thanks Dr Ashwani Jindal" - Ashwani Jindal 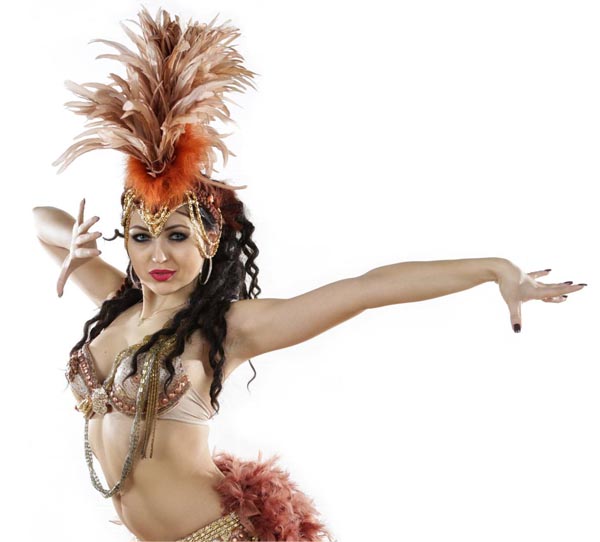 Latin dancing is one of the most beautiful and energetic shows you can find. There are many varieties of this style, but all of them have two essential things in common, sensuality and passion. Latin dancers can light up any party within a few short minutes and get your guests into a great mood.

At Hips Don’t Lie Dance Co. we offer a wide range of Latin dancing shows that can fit different types of events. With beautiful professional costumes, energizing Latin-American music, and masterfully choreographed performances, our dancers will make your party unforgettable.

Who Are Latin Dancers? 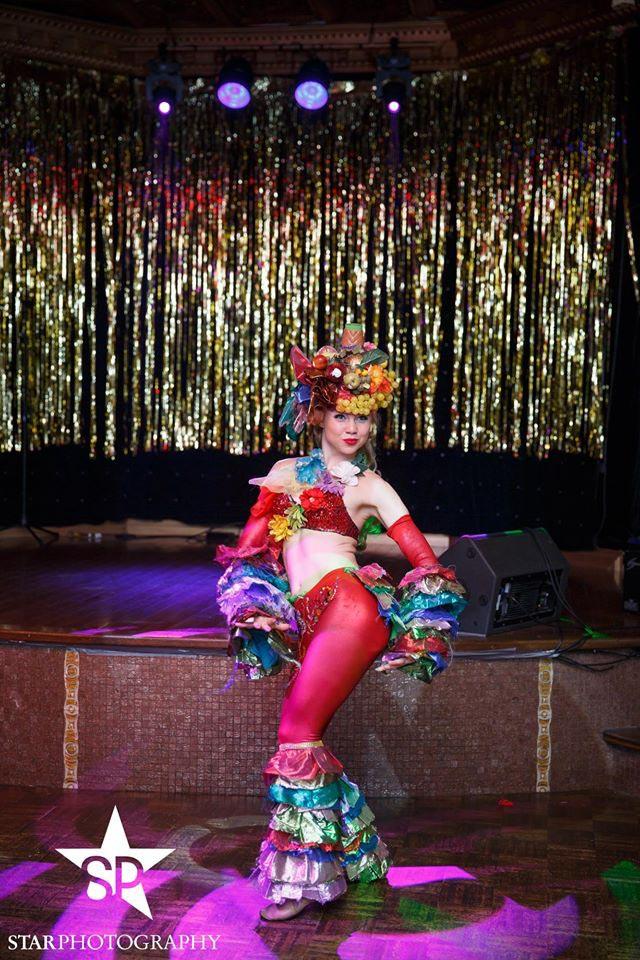 It’s very important to understand that there are many types of Latin dancing and they differ quite a bit. In fact, there are two meanings to this term:

The people of this region has always loved to dance, and many of the most popular styles originate from there. Today they are loved and practiced by people all over the world. You can see them at festivals and in regular clubs. Therefore, including Latin dancers for hire in your entertainment program will always be a great idea, even if you don’t have this specific theme for the party.

All of them are extremely dynamic and sensual. They are ‘dances of love’ so they would be a great addition to wedding entertainment.
Experienced Latin dancers talk with their bodies, expressing their feelings for the partner. If performed professionally, this show becomes an incredible sight that gets all the audience involved in the touching yet fiery love story.

The great thing about Latin dancing is that its basics are easy to learn. You can up the entertainment factor of the event by providing a simple lesson to the couples in the audience. A professional Latin dancer from Hips Don’t Lie Dance Co. will be able to teach your guests a few steps and help them get over their embarrassment with careful encouraging and guidance.

As a result, you’ll have a party full of happy and excited people who will want to test their new skills. It’s a fantastic way to get the celebration started as it helps your guests relax and forget about stiffness and formalities. Latin dancers for hire bring warmth and passion into your event, turning it into a fantastic opportunity for everyone to have fun.

The term is a general label that connotes a genre of rhythmic movement. It also refers to a kind of ballroom and folk dance that trace its roots in Latin America. It has several types, a lot of which are categories in international dance sport competitions.

It is not difficult to fathom why it has gained worldwide popularity given how dancers sway and gyrate. Each snap of the head, every flick of the hand, and each step taken seemingly tell a conjuring story.

Three different styles brought Latin dance to life – the Native American, African, and European influences. This type of rhythmic movement dates as far back as the 15th century when the Europeans were able to record indigenous dances. Its origin is geographically widespread and deep.

Explorers like Amergio Vespucci returned to Spain and Portugal with stories of native Aztec and Inca people doing intricate dances. This was at the turn of the 16th century. It cannot be established just how long these dance traditions have begun but at the time of discovery, they were already ritualized and developed. This suggested of its important origins. The indigenous dances usually depict everyday happening like agriculture, hunting, or astronomy.

While we see Latin Dance today as a form of entertainment, Latin Dance was originally an expression of a repressed culture. Most of the variations of the modern Latin Dance have their roots in Cuba but for the genesis, you go back further to West Africa.

The people of Congo, Angola and Yoruba Congo thumped their drums and stomped their feet to call their gods, to give tribute, and express their gratitude. According to one account, Ijibwa, a drummer, was taken aboard a slave ship bound for America. In order to motivate the other prisoners, he played the rhythms, which never failed to lift up their spirits.

When the slaves arrived in what is now known as the New World, they were made to forget their culture and traditions and adopt a new one—including Christianity. Of course, they couldn’t openly practice their rituals and customs for fear of reprisals. But their rhythm continued. They hummed and stomped their feet. They bang at makeshift drums. And they danced. Some say that the purpose evolved not only to give honor to their gods, but also as a form of protest.

When the colonizers introduced Christianity to the indigenous people, the sacred days for when they practice their ritualistic traditions were substituted by religious schedules. Ritualistic music and dances were seen on festivals and during the fiesta celebration of a patron saint.

By the 18th Century, elite Europeans introduced their own dances in their colonies. It’s not clear when the fusion started but the local populace integrated it into their native dances.

So a dance is a mirror of a culture that has long been forgotten. This is why Latin Dance is very important and should not be reduced to just a form of entertainment.

Why did Latin Dance originated in Latin American countries? This could be partly because of the culture of the native population, which makes it easier for African slaves to assimilate. In North America, they had no chance because of the active hybridization and homogenization of the people. They were taken in large groups and then separated in plantations all across the United States.

We are always afraid of things we do not understand. And for the early Americans, strange rhythmic noises coming from their African cotton pickers were very scary indeed. So their drums were taken, their traditions suppressed, and their identities were honed and shaped according to their masters’ bidding.

The African Influence In Latin Dance

Watch any African ritualistic dance and you can see similarities in Latin Dance.

Although there are many variations, the World Dance Sport Federation typically categorizes the Latin Dance into five:

Samba – This Brazilian dance is heavily influenced by the African culture, particularly for people in Angola, as migrants brought over their tradition when they made their way to Latin America. Over the years, however, it evolved into what is known as Samba today.  When you say Samba, however, you are actually referring to the different styles, such as Samba no pé, Samba de Gafieira, Samba Pagode, Samba Axé, Samba Reggae, Samba Rock, and Samba de roda.

Cha-Cha – This dance originates in Cuba which took roots in the 1950s. Cha-Cha is heavily influenced by the danzón-mambo, which itself started in the 1930s. The name is derived by sound that the fast shuffling of feet makes. Composer Enrique Jorrín was credited for this dance. When he was with the Orquesta América, he tweaked the music based on the danzón and mambo, and dancers were quick to pick up the tempo, which created the distinct triple-step of the Cha-Cha. Historians, however, think that the Cha-Cha, like the Samba, also has its origins in the African culture.

Rumba – Rumba was originally not a dance but a term referring to a festivity. The first time the term entered the English vocabulary was as early as 1919. By the 1930s, it was already synonymous with a type of a ballroom dance. Rumba actually has several variations, depending on where you are located in the world. You have Rhumba, which is the generic term, or Creole Rumba, Congolese Rumba, and Cuban Rumba. In terms of the Latin dances, however, this one is the most sensual. The slow movements, the deliberate movements, and the expressions of the face and body of the dance partners all evoke eroticism.

Paso Doble – Literally, two-step, Paso Doble is a Spanish dance that illustrates one of the country’s most popular pastimes—bullfighting. The steps are fast-paced since dancers have to make about 120 steps every 60 seconds. There’s a lot of the Flamenco infused in this dance, too. If you know what to look for, in some of the dances, the man is the bullfighter while the woman is the bull. They challenge, prod, and test each other in tension-filled movements. The steps are also based on precise military movements, particularly on French marches. Although the dance evokes bullfighting, it was the French that invented the dance after seeing a bullfight.

Jive – This type of dance was brought over to North America by the African slaves during the 1930s. It’s basically the jitterbug but turned up a notch. There are some influences of the swing that was developed in the East Coast, as well. For international contests, judges will look at the tempo and energy, lots and lots of it. The legs would be high up doing a pumping action with the rump thrusting up in tempo. They follow a pattern of a rock step following two triple steps. It’s even faster than the Paso Doble because the dancers have to finish 176 steps per minute.

Other Types of Latin Dance

Of course, dance being a universal expression you would expect to have it in many variations. In Dominican Republic, they have the Meringue, featuring basic movements, which makes it fairly easy to learn. Puerto Rico had its Danza, which was traditionally a courtship dance, and the Bomba, which was similar to the Rumba.

The Bachata and its four-step pattern also originated here. Buenos Aires, meanwhile, gifted the world with the Tango, another sensual dance that requires the perfect chemistry of the partners because there’s a lot of improvisation involved.

We can’t really escape the fact that Latin Dance has a dark history but the times have changed since then. It’s understandable that Latin Dance also evolved as a form of celebration, as a form of joyful expression, as gratitude, and a showcase of skill as in the case of dance competitions from all over the world.

Latin Dance also has gone beyond the indigenous mores and rituals and into the halls of corporate offices, parks, and shopping malls, and dance studios. It’s now being taught to men and women alike who want to live a healthier life. It’s also being used as a therapy of sorts for people with anxiety problems.

If you want to learn the different Latin Dances, contact the friendly customer representatives of Hips Don’t Lie. You can start off with the easy ones until you are sufficiently comfortable with your body. Then the lessons will graduate to more elaborate steps and movements. Meanwhile, the studio also accepts corporate events, birthday parties, reunions, and other gatherings. They will send over their dancers who are experts at all forms of Latin Dance to perform at your event.