Gypsy dancing is dynamic and filled with passion. This performance, also called Roma dancing, is fiery and it spreads its boundless energy to the audience motivating everyone to join in and have the time of their lives. Hiring professional gypsy dancers will be a great choice of entertainment for weddings and any large parties where lots of people want to relax and enjoy themselves to the fullest.

"Lyana was invited to perform for my dad's 50th surprise birthday party. Without a doubt she was the highlight of the night and made the night one to remember!!! She engaged everyone on the dance floor. I would definitely recommend her, or the hips don’t lie studio to everyone!!!" - Naveena Nandipati 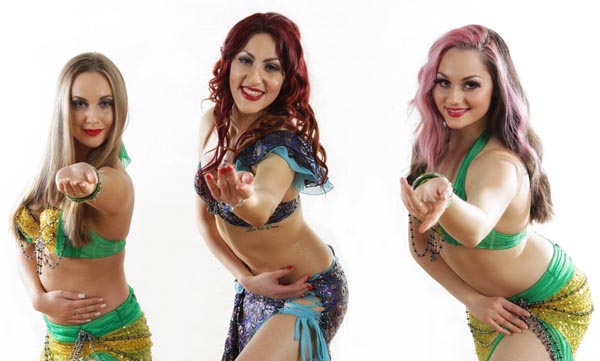 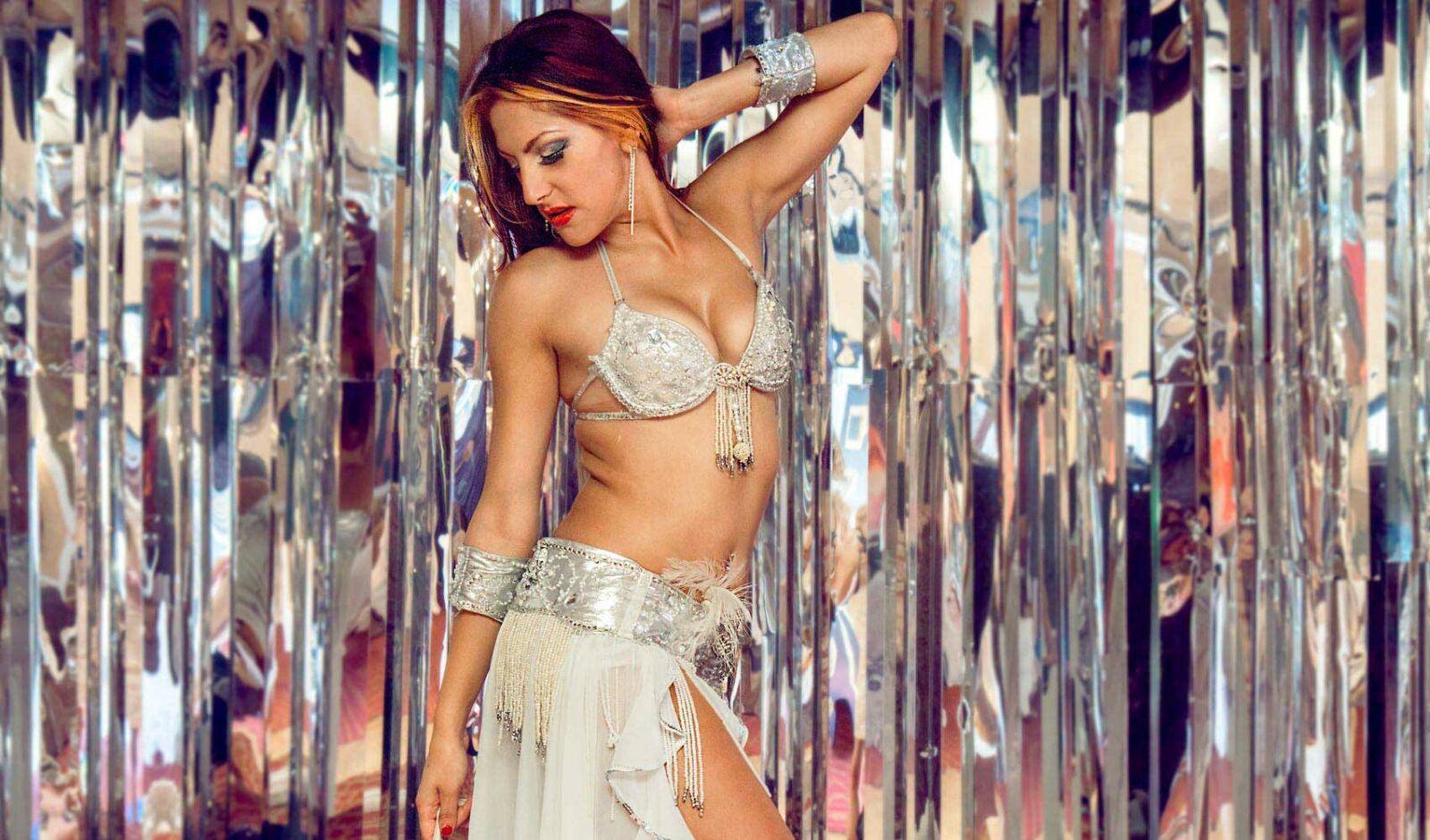 Gypsy dancing is dynamic and filled with passion. This performance, also called Roma dancing, is fiery and it spreads its boundless energy to the audience motivating everyone to join in and have the time of their lives. Hiring professional gypsy dancers will be a great choice of entertainment for weddings and any large parties where lots of people want to relax and enjoy themselves to the fullest.

Who Are Gypsy Dancers? 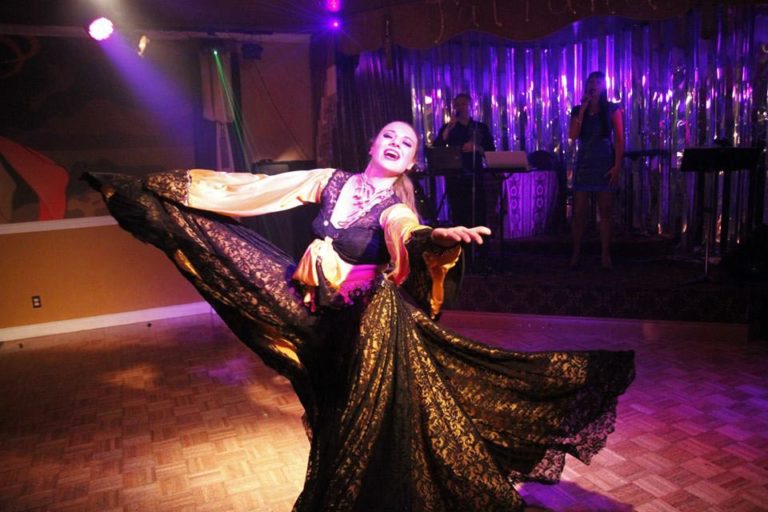 Any dancing style is difficult to define with words and it gets even harder in this specific case because ‘gypsies’ are extremely versatile peoples that come from all corners of the world. This style is a mix of hundreds folk elements from different cultures as well as some unique elements characteristic to the Roma people of the region.

Gypsy belly dancers are one of the most popular varieties of this style we can see today. It’s not surprising considering the fact that many of the Roma tribes traveled all over Asia and collected some bits and pieces of local traditions.

The style of gypsy dancing offered by Hips Don’t Lie Dance Co. includes elements from all the most popular schools with a unique twist from our talented performers that creates an unforgettable show. Gypsy dancers can ‘break down’ the stiffness of even the most formal events helping people relax and creating a great mood.

Rajasthani Gypsy Dance for Those Who Love Exotic

The best word to describe Rajasthani gypsy dancing style is ‘vibrant’. It’s a beautiful folk dance that originates from nomadic tribes from the north of India. This dance is graceful and energetic at the same time. It also played a very important role in the history of peoples who invented it, the Kalbeliya. These nomads were snake charmers earning their living through catching snakes. However, this practice was prohibited by the Indian government in 1972, which almost ruined the Kalbeliyas. At that time the elders of the community recognized the popularity of their women’s dances and allowed them to perform to audiences. The beauty of the dance was such that it came to be recognized as an art form and a part of India’s cultural heritage. These performances turned Rajasthan into a top tourist destination and they have been constantly growing in popularity. Today, you can hire a team of professional Rajasthan gypsy dancers to spice up your Toronto event and make it unique. Hips Don’t Lie Dance Co. can service any kind of corporate event, birthday, wedding, or bridal party. 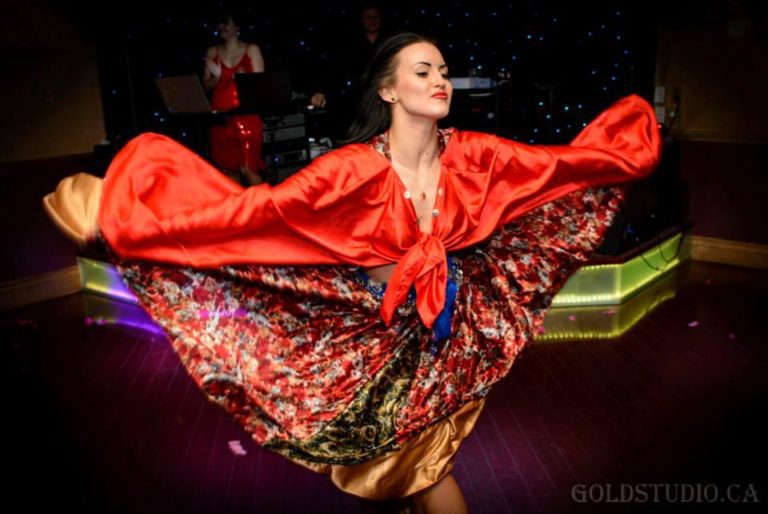 The Gypsies and Their Dance

They were called wanderers, nomads, and, once in history, were persecuted and discriminated against. While much of their culture has disappeared due to assimilation and gentrification, one tradition still remains: the gypsy dance. Successive feet stomping and rhythmic hands, as well as elaborate hand movements characterize the gypsy dance. The graceful manipulations of long skirts and the smooth flow of the gypsy dancers’ hips never fail to keep the audience enthralled.

Gypsy dancers wear long, colorful, full skirts with their long hair down. But aside from their enchanting movements, what do you know about the people from where gypsy dances originally came from?

Who were the gypsies?

Gypsies, also called Roma, were believed to have come from the Punjab region in the northern part of India and arrived in Europe more than 1,500 years ago. They were described as nomadic people who were thought to have come from Egypt. That’s why Europeans called them “Gypsies.”

The Sinti were generally found in Germany and Western Europe, while the Roma were found in Austria and Eastern Europe. They spoke dialects called Romani, which is based in Sanskrit. Sanskrit is believed to be the ancient language in Hinduism, the largest religion in India.

Some references refer to Gypsy as a minority group made up of tribes or nations. They lived in Germany and Austria. Early scholars estimate that the population reaches to a little less than a million. That’s the total in the world. However, a recent study focusing on genetic analysis found there were actually 13 Gypsy groups. The study also showed that there are 11 million Gypsies in Europe.

Many of them worked as craftsmen, tinsmiths, toolmakers, cobblers, performers, animal trainers, musicians, and of course, dancers. Being a minority group, Gypsies experienced discrimination for many years.

Some references would tell that Germans called Gypsy, Zigeuner, which means “untouchable.” The United Holocaust Memorial Museum website said “Gypsies were slaves bought and sold by monasteries and large estate holders (boyars) until 1864,” in Moldovia and Wallachia.

Gypsies have a strong bond with their communities and they are educated primarily in their home and their villages. This strong cultural bond is shown when they travel in throngs going to other places. A lone gypsy will always sought out the local community when traveling to a strange place.

Dance of freedom and passion

But the challenges that the Gypsies faced were shown in their music and dances that they passed from a generation to the next. Some texts refer to the rich culture of Gypsies as a fusion of various cultures they have encountered.

These could explain why the gypsy dance has a graceful movement that shows freedom of movements and expresses the dancer’s passion and playfulness. Far from the dreary portion of the Gypsies’ history, the dance of the Gypsy pops out colors in every hop and hip movements. Today, there are various Gypsy dance styles from many countries, such as Russia, Hungary, Romania, Greece, and Turkey.

The dancers from Kalbeliya wear black and costumes of intricate embroidery and perform rapid twirls as if conjuring “kundalini” or the serpent power. They make a circle where all women performers are encouraged by the singing of other women even without any exact dance pattern to follow. The dance is a way for them to pay tribute to the Mother Goddess Kali.

The women of the Kalbeliya were known commonly as snake charmers and priestesses of the snake god. They were often called Sapera, the Hindi word for “snake charmer.”

There is also a dance performed by Romani musicians and dancers in Sulukule, a legendary district in Istanbul that is famous for the Roma settlements in the world. They fused local folk music and dances and they were known as masters in dancing a 9/8 rhythm known as Roman or Karsilama. They dance with exquisite movements that are usually defined as earthy and refined. The dances were characterized by contortions, body twisting, and playful gesture.

As a short review, Roma people are of Indian origin. Their language is called Romani and is closely related to Hindi. They migrated west in the 11th century. They were very famous entertainers during the Ottoman empire. Today, a lot of famous artists in Istanbul are Roma.

The largest subgroup of the Romani people living in Russia and Belarus are called Ruska Rom or Russian Gypsies. They were mostly nomadic horse traders, and performers who traveled during the summer. In the winter, they paid for lodging in Russian peasant’s cottages using the money they earn from their horse trading.

Romani dance from Russia is well-known for its whirlwind spins and the use of flamboyant skirts. The arm movements of the dancers are influenced by Russian ballet.

The Spanish Flamenco dance was born out of the solidarity of Gitanas, Muslims, and Jews who were persecuted by church and state authorities in Spain during the 16th century. Its origins were rooted in the gypsy culture of Andalusia, located in the south of Spain. Dancers try to conjure the magic of the dance through precise footwork and harm and arm movements.

Other references would also say that the origin of Flamenco will still be a subject of debate since details of its development were lost in history. The music and musical instruments used by early Flamenco dancers from Andalusia were later modified and adapted by Christians and Jews. The gypsies were accordingly presented as adapting the dance later making it a hybrid music separate from its original musical forms.

Want to get the Gypsy look? Here’s what you should wear

The main pieces of Gypsy attire are the blouse and the skirt or dress.

Here are some tips on getting the perfect Gypsy look:

Gypsy dance: Good for the mind and body

Like other forms of dancing, doing a Gypsy dance has a lot of benefits for the body and mind. Any style of Gypsy dance is distinguished by energetic tapping, footwork, jumps and arm movements.

Dancers need to improve their posture and flexibility to be able to perform the intricate movements, usually in manipulating the wide skirt to perform graceful movements. Dancers should endure long training that requires them to follow rhythms and keep their minds in focus.

Dancers can best perform the Gypsy dance by immersing themselves in character and understanding the resilience of the creative Gypsy people. The Gypsy diaspora from India to Central and Eastern Europe speaks so well about the struggles of a group of people who were able to preserve and enrich their culture despite the challenges.

When you get to understand the origin of a dance, you feel more connected to the movement of your body when you try the Gypsy dance. You feel the earth moves with you just like how the Kalbeliya and Turkish Rom did. The movements will follow naturally like the versatile Gypsy dancers.

If you want to learn about Gypsy dance, you may see how the professional Gypsy dancers of Hips Don’t Lie Dance Co. perform it with much dynamism and passion. Watching Gypsy dancers are preferred in many events nowadays as people get a glimpse of the bits and pieces of local cultures and traditions accumulated by the Gypsies while keeping themselves entertained.

How to get back into dance form after a long break

Are you ready for a NY? It's been a good year. Let

Merry Christmas from our family to yours ❤️❤

Yesterday we had the honour to perform for MPP @na

Our angels are here to protect your event from bor